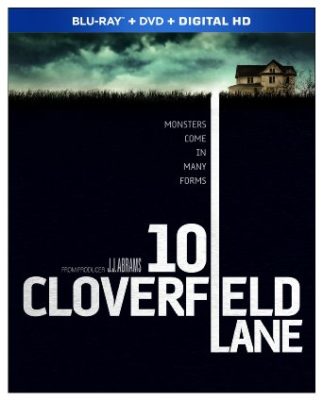 Is it the end of the world, or is Howard a crazy man (is it possible that both are true?) – and how is Michelle supposed to figure that out?

10 Cloverfield Lane is likely to make a few best of the year lists for it’s tight plotting, terrific characters and superb production.

On May 31st, Paramount Home Media Distribution brings 10 Cloverfield Lane comes to Digital HD – with Blu-ray and DVD following on June 14th. Follow the jump for a list of extras (nothing on the DVD! BOO!).

Certified Fresh by critics with a 90% score on Rotten Tomatoes, 10 CLOVERFIELD LANE delivers “heart-pounding fun” (Patrick Stinson, “Made in Hollywood”) that will “shock you senseless” (Peter Travers, Rolling Stone).  After a catastrophic car crash, a young woman (Mary Elizabeth Winstead, Scott Pilgrim vs. The World) wakes up in a survivalist’s (John Goodman, Argo) underground bunker. He claims to have saved her from an apocalyptic attack that has left the outside world uninhabitable. His theories are supported by a mysterious stranger who is in the bunker with them (John Gallagher, Jr., “The Newsroom”), but as his increasingly suspicious actions lead her to question his motives, she’ll have to escape in order to discover the truth.

With a shocking finale that “will completely blow you away” (Eric Eisenberg, Cinemablend), 10 CLOVERFIELD LANE looks phenomenal on Blu-ray.  The Combo Pack includes Digital HD, commentary with director Dan Trachtenberg and producer J.J. Abrams, and over 30 minutes of special features. Take an extensive look behind-the-scenes with Abrams and the cast as they revisit the legacy of 2008’s CLOVERFIELD, and discuss how 10 CLOVERFIELD LANE went from script to production. Continue with a tour of the ominous bunker, see how the costume designer was challenged to create a homemade Hazmat suit, follow the production team and sound designers as they work on the movie’s epic finale, and hear the unique scores composed for each character.  Plus, for a limited time only, get a bonus Digital HD copy of the original CLOVERFIELD with the Blu-ray Combo Pack.

The Blu-ray Combo Pack available for purchase includes a Digital HD version of the film that can be accessed through UltraViolet™, a way to collect, access and enjoy movies.  With UltraViolet, consumers can add movies to their digital collection in the cloud, and then stream or download them—reliably and securely—to a variety of devices.