Entertainment News for The Rest of Us
Liana Bekakos
Comic Books, Television 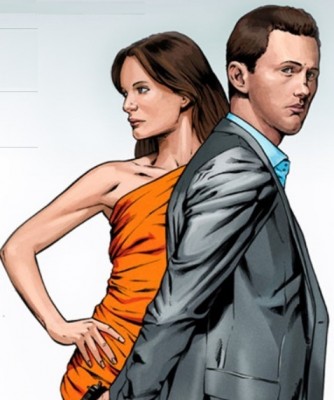 Fans who can’t get enough of their favorite spy and the accompanying  colorful cast of characters, now have another diversion to devote time to.  USA Network, in partnership with DC Comics, announced its first series of interactive multiplatform comics with a series created to bridge the storylines between seasons four and five of BURN NOTICE.  The comic, entitled  “A New Day”  and written by the creative team behind the show, including series creator Matt Nix, goes beyond the two-dimensional traditional comic by offering enhanced user experiences including interactive games, hidden ciphers, artwork peelaways and more.  Chapter one went live in tandem with the fifth season premiere of BURN NOTICE last Thursday, June 23. Having garnered over 100,000 page views since it launched,  “A New Day”  is available on www.usanetwork.com, Facebook and as a freestanding iOS and Android App on select devices.  The only caveat is that your browser must be updated to the absolute latest in order to view it.  The nine pages of storyboard of each chapter read very quickly providing straight-forward info, but the interactive bits provide for some interesting and fun diversions.

“As a life-long graphic novel reader, naturally I was very excited to extend our storyline to this medium because it allows us to expand and develop our BURN NOTICE universe into an entirely new realm,” said Matt Nix, creator and executive producer of Burn Notice, the series.  “In terms of the comic book itself, it’s not like the ones I grew up with. Now we have the opportunity to see the characters and their lives, but from a different perspective, one that fans can interact with, play with and share.

“A New Day”, the first-of-its kind interactive comic book gives fans insight into the series’ first-ever time jump. During last season’s finale, Michael Westen (Jeffrey Donovan) obtained a list of 31 people responsible for ‘burning’ him, but when fans return this season only two will be left. The comic reveals the missing pieces over 12 weeks through an original story. With custom illustrations from comic book powerhouse DC Comics, the comic book features original video, unique interactive features and gaming content with new chapters launching each week throughout the season.

“Working with innovative partners, we’ve created a dynamic and fun interactive comic book that gives our fans a level of engagement that they’ve never had before,” said Jesse Redniss, vice president of digital, USA. “We are pushing the technology boundaries to enhance the user experience beyond the one-hour telecast and expanding the story arc into new arenas.” 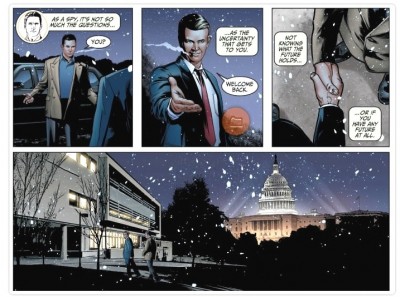 In addition to working with DC Comics, USA teamed with Panelfly, who built the mobile applications, and Glow Interactive who developed the online and Facebook versions, as well as the mobile interactive overlays.

BURN NOTICE stars Jeffrey Donovan as Michael Westen, a blacklisted spy who finds himself stranded in sun-soaked Miami. This season viewers will find out if Michael has found his way back into the CIA, if he’ll return to Miami and whether or not he and Miami’s new counterintelligence expert, Jesse Garcia (Coby Bell) can co-exist. Also heating up South Beach are Fiona (Gabrielle Anwar), the beautiful ex-IRA operative and Michael’s ex-girlfriend; Sam (Bruce Campbell), our favorite washed-up military intelligence muscle; and Michael’s mother (Emmy Award-winner Sharon Gless), who is one tough cookie herself. From Fox Television Studios and Fuse Entertainment, the series is created, written and executive produced by Matt Nix with Mikkel Bondesen and Alfredo Barrios as executive producers.  Burn Notice airs Thursdays at 10pm on the USA network.